Due to the global pandemic slowdown 2020 was musicwize a great year for unexpected archive releases and supporting artists with no other income via digital purchases.
Concerts I’ve missed where I already had tickets for (Heaven 17 and Drew McDowall). Other tours and events, like the James Bond Movie f.e. and the cabaret shows I had in mind just disappeared
but at least no one I live along was seriously ill and suffered which allows me to keep some hope left for the better.

Like so many I’ve spent unexpectedly much time at home which brought the bonus of listening to more longform pieces and much more music in general. One of the artists I discovered and listened a lot to was OhmikRon, a Musician and DJ from Hungary with many mixes online at soundcloud and a batch of releases spread over various platforms and labels. I already featured one of his extraordinary dubtech tracks here month ago but as the according album was issued in early February I won’t miss the chance to include it here.

Another early bird of 2020 when we still thought Donald Trump and his likeminded fans where one of the greatest global Problems was the 2nd Album from the US Ska / Pop act Heavensbee. Different line-up and new singers but lyrically and musically a great pleasure to listen to, especially when it get’s a little more sunny outside. I kept this one always on my phone;

In March thing looked more grim already and an emotional snapshot of mixed feelings, effects of isolation, unforeseeable future developments, danger through social habits reached me via Marco Milanesio’s new label hum_an. Italy was by then more haunted than Germany as I recall and it was hard to believe the news.
A collaboration of DsorDNE with Onda Lunga, the resulting 20+ Minutes left an lasting impression on me.

May brought a new 10″ single by an artist I’ve been following through the years, since I discovered the first Bourbonese Qualk album in a 2nd Hand store and discovered a pretty unique approach
leading to many styles and releases I enjoyed a lot. Since the end of BoQu he released two brilliant albums as solo artist, the second more electronically based and more easily to obtain appeared in 2018 and this was the first new release I found issued in dubplate form on a small french label with a version on the flip. Digitally not fully available online but really worth tracking down.

Also in May ŽEN from Croatia issued this free / pay what you want Remix Album to celebrate their 10th Anniversary I stumbled upon while looking up whatever happened to Borghesia, a pretty underrated ex-yugoslavian band I’ve been listening a lot to somewhen in the last century. While their regular Albums are recommended on their own too this more electronically / experimental approach collected here works surprisingly well and I’m sure their lyrics are full of passion and sense too.

June brought the next fruits of the Cousin Silas / Glove Of Bones colloboration, actually the 4th already and this one connects even more wildly than it’s predecessor Afrodubism with a fictious Africa, Voodoo and Experimental Dub. It can be reminiscent of African Head Charge at their heights while adding the spiritual freedom of The Grateful Dead and after repeated listening it get’s addictive. Great Stuff, you’re warned. And it was releases on Cassette too. Who could have believed we’ll return to buying tapes casually in 2020?

Always a pleasure is a new release by Little Annie Anxiety, while never sure if it will be more Torch, Experimental or Blues orientated her lyrics and incredible smokey voice classified her years ago as the diva of our generation. Her history is as interesting as her whole ouvre – working with Crass, On-U Sound, Coil, painting, writing and during the last years being involved with Italian group Larsen a lot she returned with a new album which bears one of the very best suitable titles for 2020 imho; ‘A Bar Too Far’. Contrary to her last one this leans more into the blue hours, recorded with Paul Wallfisch on the Piano once more after a break of 10 years and also featuring Kid Congo Powers on several tracks. Since July only available digital with full cd graphics enclosed on a ‘pay what you want/can’ base, all proceeds are donated to a good cause in her local community at Miami, Florida.

Shriekback where one of the artists who took their chances to empty their archives this year in full. Nearly no month without a release passed by and I still did not manage to catch up with it. Besides rare live and session material, collaborations and solo stuff now nearly their complete catalouge is now available digitally too but only via their homepage.
No other way supports the artist more directly, so check it out, also a wealth of free downloads can be found there to wet your tastes. Stic Basin was an project started by Barry Andrews years ago and besides my chance to get the first release finally he also found time to get this 30 Minute something Album out in October, even physically as limited DIY CD in hand stamped and personalized digipak too. The only fault I could find was – it is too short. 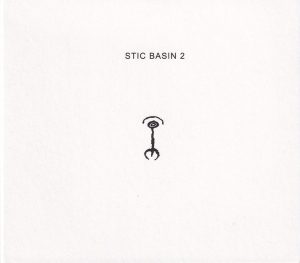 Coincidentally another 17 years came to fruition for Denise Sherwood, the eldest of Adrian (ON-U Sound) Sherwood’s daughters. ‘This Road’ as she frankly admits in interviews was devoloped, rethought, re-recorded in parts nearly endlessly. Still it sounds like a ‘Fairy Tale’ and fulfils all the promises her contribution to 2019’s excellent ‘Pay It All Back, Vol. 7’ compilation ‘Ghost Heart’ made. This is charming, groovy and – dare I say – soulful at once.
Of course it helps if you have Lee ‘Scratch’ Perry, Skip McDonald, Doug Wimbish, George Oban, Keith LeBlanc, Carlton Oglive, Mark Stewart and equally talented guests at hand and a great producer and engineer as father. I just wished she could have gotten her mother – Kishi – to do one of the classy ON-U sleeves for this, while I understand that the japanese styled aquarell of flowers in a broken vase in mellow colors might be for her the perfect fitting artwork. Available in all formats, a real gem.

Released in late Autumn, End of October came Drew McDowall’s 4th solo album, his closest to Ritual Music and to his time with Coil yet. A differentiated and very delictate but minimimal and ambient work. Coupled with utterly bizarre artwork by NY artist Caroline Schub who sees her work as public record of chronic illness and published by Dais Records in a variety of formats including limited beautiful grey smoke Vinyl, green transparent and unlimited black Vinyl. Digital it comes along with it and two extra tracks. I did not expect too much from this to be honest but working on Coil reissues he was involved in and the Time Machines live project it seems he found his way now more focused again. ‘Agalma’ is a sublime pleasure, where musicanship, vision and well crafted mastering and production meet.

Beginning of December a 19 track fundraiser compilation supported and initated by local artists with all donations going to Our Kitchen on The Isle Of Thanet (1hr away from London on the coast of Kent) was published via bandcamp digital only. While for me the unknown and exclusive tracks of artists I knew – Adrian Sherwood Mixes, Mark Stewart Vs. NoHumanEye, Youth and one of the last mixes done by Andrew Weatherall for Meatraffle – did not let me think very long about the 5 P.St. asked for it. Especially after using the chance listening to it as a whole I was impressed with many of the tracks by artists I’ve hardly ever heard of. This is an outstanding compilation and worth every Penny.

Of course this listing can only be a glimpse, there have been several more outstanding and remarkable releases throughout the year and most likely even more I simply missed and find about in years to come.